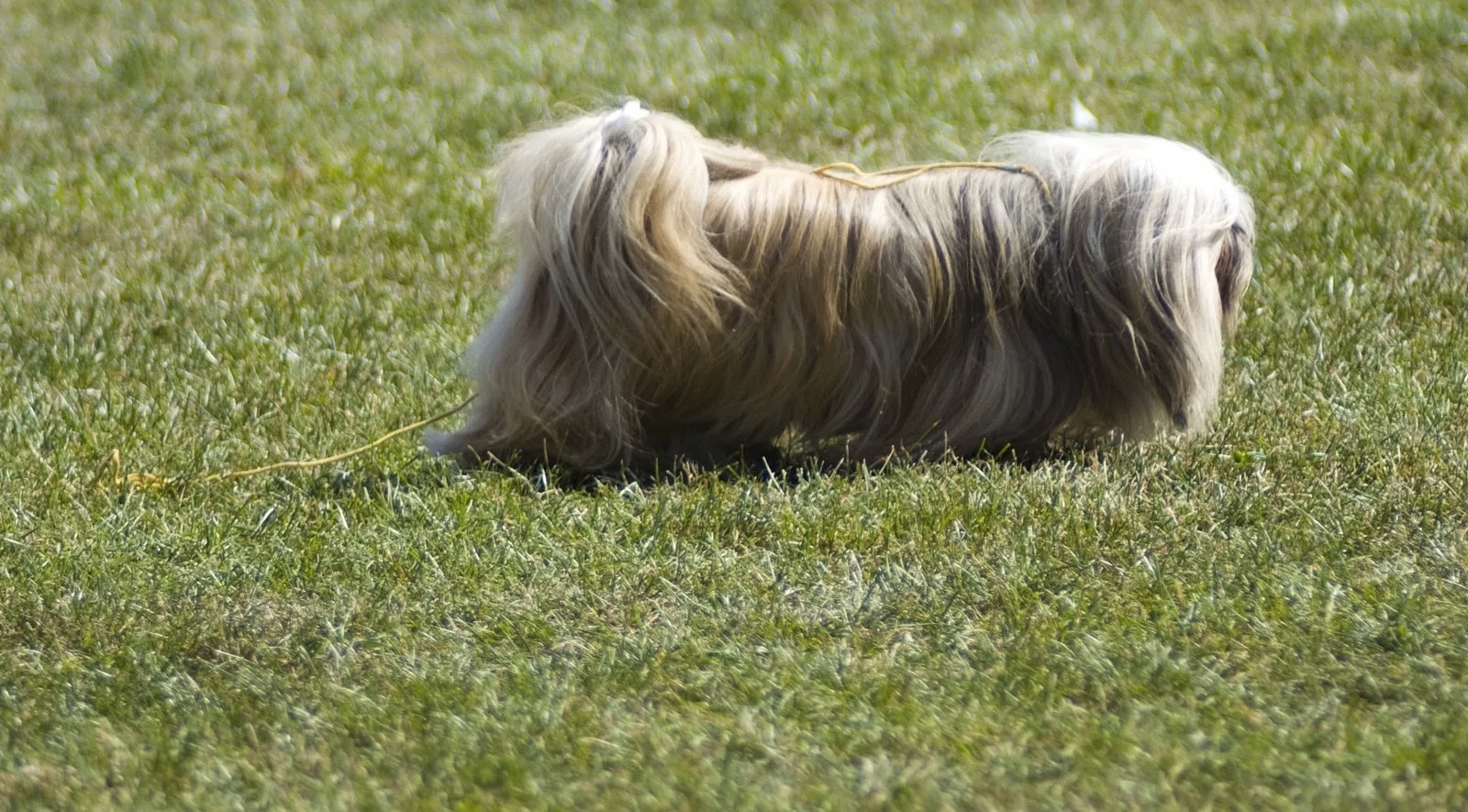 Physical Description of the Pekingese dog

The Pekingese is a small-sized, toy group, double-coated, flat-faced, and curly-tailed dog.

The pekingese comes in many different color variations such as gold, sables, white, black and tan. 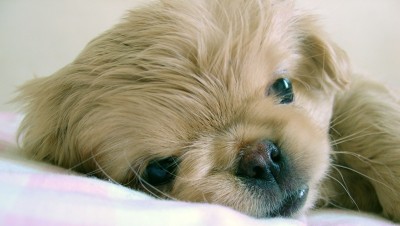 One of the most-telling physical characteristics of a Pekingese is that it has a flat and black face. The chin, nose, and forehead appear to form a straight line when viewed from the side. The face is black mostly on the bottom half of the face around the mouth/lip area, through the nose, and many times upward from the eyebrows which is actually a melanistic mask. The face is wrinkled, with one main fold of fur-covered skin diagonally positioned between the eyes and nose, like an upside-down letter ‘V’ above the nose. The forehead is broad and ears fall down along the sides of the head. Facial fur is short through the face and only grows long on the ears and towards the rear half of the top of the head.

The pekingese has a small compact body. It is somewhat shaped like a lion or a pear. It is bigger at the front than in the back, with a broad chest. When a pekingese has short, trimmed hair, it has a visibly lean and muscular looking body. A show/competition dog should not have its coat altered or trimmed.

The legs are short, with the front legs bowed. The knees are close to the body.

The tail is long and thin. It grows a lot of hair and it can completely curl up, making one and a half complete loops.

The Pekingese dog has a double coat, an undercoat and a outercoat. The undercoat is shorter, soft and thick. The outercoat is long, straight, and flows liberally.

A pekingese will top out at 14 pounds. There are other versions of the “heavier” breed such as the sleeve Pekingese, which has a maximum weight of 7 pounds and the mini, which weighs from 7-9 pounds.

Historical Standard for the Pekingese

This dog breed is one of the earliest in history to have a written standard, which is a set of guidelines for the proper looks and appearance that a particular should have – which has led to the pekingese being the same dog for thousands of years.

This standard, from Empress Dowager Cixi, Emperor of China from 1861 to 1908, was discovered. It says:

Let the Lion Dog be small;
let it wear the swelling cape of dignity around its neck;
let it display the billowing standard of pomp above its back.

Let its ears be set like the sails of war junk;
let its eyes be large and luminous;
let its nose be like that of the monkey god of the Hindus.

Let its forelegs be bent;
so that it shall not desire to wander far,
or leave the Imperial precincts.

Let its body be shaped like that of a hunting lion spying for its prey.

Let its feet be tufted with plentiful hair that its footfall may be soundless and for its standard of pomp let it rival the whick of the Tibetans’ yak, which is flourished to protect the imperial litter from flying insects.

Let it be lively that it may afford entertainment by its gambols;
let it be timid that it may not involve itself in danger;
let it be domestic in its habits that it may live in amity with the other beasts, fishes or birds that find protection in the Imperial Palace.

And for its color, let it be that of the lion – a golden sable, to be carried in the sleeve of a yellow robe;
or the colour of a red bear, or a black and white bear, or striped like a dragon, so that there may be dogs appropriate to every costume in the Imperial wardrobe.

Let it venerate its ancestors and deposit offerings in the canine cemetery of the Forbidden City on each new moon.

Let it comport itself with dignity;
let it learn to bite the foreign devils instantly.

Let it be dainty in its food so that it shall be known as an Imperial dog by its fastidiousness;
sharks fins and curlew livers and the breasts of quails, on these may it be fed;
and for drink give it the tea that is brewed from the spring buds of the shrub that groweth in the province of Hankow, or the milk of the antelopes that pasture in the Imperial parks.

Thus shall it preserve its integrity and self-respect;
and for the day of sickness let it be anointed with the clarified fat of the legs of a sacred leopard, and give it to drink a throstle’s eggshell full of the juice of the custard apple in which has been dissolved three pinches of shredded rhinoceros horn, and apply it to piebald leeches.

So shall it remain – but if it dies, remember thou too art mortal.

See the American Kennel Club’s Pekingese Breed Standard, which is the modern standard for this dog breed.